“In an astonishing way he too is very much d’accord with me. He is another one who wants to introduce me into Roman Catholic theology rather like a Trojan horse, but he also has his own critical little coda.”

Henri Bouillard (1908-1981) was a French Catholic theologian and professor of theology at l’Institut Catholique de Paris. Alongside his fellow Jesuits, Henri de Lubac and Jean Daniélou, and his colleague in Paris, Louis Bouyer, Henri Bouillard was a leading figure within the movement known as la nouvelle théologie or ressourcement. During the early years of suspicion surrounding this movement, Bouillard was dismissed from la Faculté de Théologie de Lyon – Fourvière in 1950. The fruit of his first doctoral dissertation, Conversion et grace chez S. Thomas D’Aquin, was published in 1944 and roused controversy from the then dominant neoscholastic theologians and influential prelates.

He moved to Paris, where he began work on a second doctorate, awarded by the Sorbonne. The result was the three volume Karl Barth, published in 1957 by Éditions Aubier-Montaigne in Paris. According to Grover Foley, this dissertation was “the first at the Sorbonne ever allowed to be written about a living author.” The oral defense was “the cultural and religious event of the year” according to the theology journal, Bijdragen, in a 1958 issue (see Foley, “The Catholic Critics of Karl Barth,” SJT, June 1961, 145).

Karl Barth was in attendance, having traveled with Hans Urs von Balthasar and Adrienne von Speyr from Basel. Eberhard Busch recounts the event in his biography of Barth. The endnotes are in brackets:

In the middle of June 1956 Barth went with Hans Urs von Balthasar and Frau Adrienne Kaegi-von Speyr to Paris. There they were to take part in ‘the doctoral examination of a Jesuit’, Père Henri Bouillard, ‘who had written 1200 pages about me. He was cross-examined about me for five hours (at the Sorbonne), and then we celebrated in a Chinese restaurant’ [letter to Heinrich Vogel, 5 September 1956]. This viva-voce examination ‘was an extraordinary event, in that the “subject” of such a thesis should not really be still alive. That I was in fact very much alive and even there in person made the whole proceedings very tense, but also added a great deal of merriment’ [Charlotte von Kirschbaum to Karl Gerhard Steck, 5 July 1956]. Bouillard was another of those Catholics in whom Barth discovered a surprising affinity to his own thought…’In an astonishing way he too is very much d’accord with me. He is another one who wants to introduce me into Roman Catholic theology rather like a Trojan horse, but he also has his own critical little coda. Unlike Hans Urs von Balthasar, however, in this case it is not some holy little Thérèse or Elizabeth, but a transcendental ontologie de la foi, agreed criteria of a Kantian character. Still…there is much to suggest that I have another chance of becoming a kind of Catholic church father in partibus infidelium‘ [letter to his sons, 14 September 1953].

I cannot imagine having Barth sitting in the audience while defending your thesis on Barth! Oscar Cullmann was one of the examiners.

Bouillard’s three volumes were never translated into English. However, you can find some translations of important sections. Parts from volume two and volume three were translated and published as an article for the spring issue of Cross Currents in 1968. The title of the article is “A Dialogue with Barth: The Problem of Natural Theology” by Henri Bouillard. This article combines the introduction for volume two and “Le problème de la théologie naturelle,” a section in chapter two of the third volume. Also, in 1967 Bouillard published portions of his Karl Barth in a single volume of less than 200 pages, Connaissance de Dieu, which was translated the following year and with the same title, The Knowledge of God. So, these are the two places where you can find some of Bouillard’s work on Barth in English.

Barth refers to Bouillard’s transcendental “ontology of faith” and its “Kantian character.” Bouillard believes that the possibility of natural theology is necessary. As a possibility, this refers not to actual knowledge but, rather, to the “transcendental condition” necessary for any knowledge of God to happen at all. Without this transcendental condition, which corresponds to our being made in the image of God, our faith in God would be arbitrary. “It is not enough to appeal to a miracle of revelation or grace, which takes hold of our intellect and subdues it. Immediately the question rebounds: how can we know that our faith is the result of a miracle, that is to say of God’s action, and that it is not simply an arbitrary human act?” (“A Dialogue with Barth,” 218). Here is the final paragraph in the article:

That is where the article ends, unfortunately, just when you are excited to read more! If you look at volume three, from which this excerpt is taken, Bouillard continues for several more pages.

Based on these translated portions alone, it is not clear exactly what Bouillard considers to be, as he writes earlier in the article, “the judicatory principle which would permit us to establish in truth the recognition of divine revelation in history” (218). Grover Foley likens it to Bultmann and Schleiermacher (Foley, ibid., 146-147). Bouillard is striving to articulate the way in which we know it is indeed God who we know in faith. This means that there must be some correspondence between God and ourselves, in our capacity to know that this is God who is being known. Any precondition of this sort is rejected by Barth.

That should spark your interest in Henri Bouillard.

On a final note, it is worth mentioning that Hans Küng was also in attendance at Bouillard’s defense. Küng recounts it in his memoirs, My Struggle for Freedom. Küng feels that he was slighted by Bouillard when they were both in Paris working on Barth’s theology and even claims that Bouillard was “jealous” of the younger student (p. 129). Henri de Lubac defended Bouillard against Küng’s criticisms (Dokumente 14 [1958], 448-454). Rudolf Voderholzer writes:

[Küng] had first accepted help from Bouillard while writing his 1957 doctoral thesis on Karl Barth, but one year later he severely and a bit condescendingly criticized his mentor’s interpretation of Barth. In his study of Barth, which took a very favorable view of the Protestant theologian, Küng had tried to prove, from just a few passages, that Barth was advocating a position, in regard to the doctrine of justification, that is acceptable to Catholics. Bouillard’s perspective was more differentiated and skeptical, and of course Küng accused it of hampering the ecumenical movement.

For what it’s worth, First Things had a scathing review of Küng’s memoirs: “At age seventy-five, Catholicism’s best-known theological dissenter has published a memoir that is an unmitigated embarrassment. The vulgarity of the author’s self-aggrandizement is breathtaking, the viciousness toward those who disagree with him deeply saddening.” I have no idea if Küng’s grievances toward Bouillard are legitimate, but he is not successful at hiding his self-regard in recounting the events.

Here are a couple more images (click to enlarge): 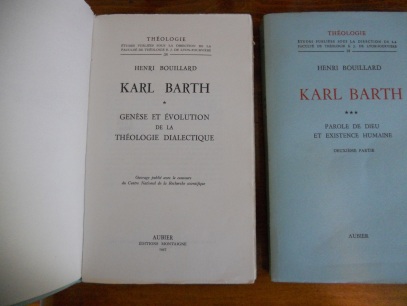 On the left is the nihil obstat and imprimatur. On the right is the dedication to Fr. Henri de Lubac “in gratitude and affection.”