The Unity of the Church 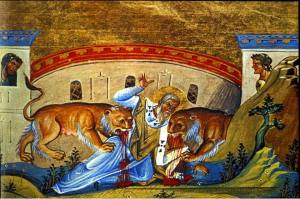 I recently re-read St. Ignatius of Antioch’s letters. These are among the earliest extant writings that we have from the church outside of the New Testament.

There are seven letters, including a letter to St. Polycarp of Smyrna. Ignatius and Polycarp have similar histories. Both were bishops, both were martyrs, and both are believed to be disciples of an apostle: St. John the Evangelist. Not too shabby. These letters were written while Ignatius was en route to Rome, where he was fed to wild beasts in the Colosseum. Ignatius died in c. 108, so these letters are from the first decade of the second century. And as bishop of Antioch, he was bishop of a very important city for the apostolic mission and burgeoning church — and, eventually, an honored patriarchate in the Orthodox Church.

Like Irenaeus in the subsequent generation, Ignatius is concerned with heresy, such as a docetic christology. It is actually quite astonishing, the intensity of Ignatius’ concern with heresy, all the while being led to his glorious death (as he assures us in exuberant language). The concern is evidently much to do with the unity of the church. This is a prominent characteristic of his letters. Importantly, Ignatius’ appeal for church unity and the rejection of false teachers is directly and explicitly tied to the authority of the bishops.

Bishops are a big deal for Ignatius. Sure, he’s a bishop himself, but he can hardly be accused of personal aggrandizement. I will not discuss the extensive scholarly commentary on ἐπίσκοπος (episkopos) and πρεσβύτερος (presbuteros/presbyter) in the NT. Others can draw-out any relevant points.

I provide some excerpts below — with ellipses omitted for the most part — and my thoughts afterwards.

I hasten to urge you to harmonize your actions with God’s mind. For Jesus Christ – that life from which we can’t be torn – is the Father’s mind, as the bishops too, appointed the world over, reflect the mind of Jesus Christ. Hence you should act in accord with the bishop’s mind, as you surely do.

It is written, moreover, ‘God resists the proud.’ Let us, then, heartily avoid resisting the bishop so that we may be subject to God.

It is clear, then, that we should regard the bishop as the Lord himself.

Now, it is not right to presume on the youthfulness of your bishop. You ought to respect him as fully as you respect the authority of God the Father.

Hence I urge you to aim to do everything in godly agreement. Let the bishop preside in God’s place, and the presbyters take the place of the apostolic council….

As many as are God’s and Jesus Christ’s, they are on the bishop’s side; and as many as repent and enter the unity of the church, they shall be God’s, and thus they shall live in Jesus Christ’s way. Make no mistake, my brothers, if anyone joins a schismatic he will not inherit God’s Kingdom.

Flee from schism as the source of mischief. You should all follow the bishop as Jesus Christ did the Father. …Nobody must do anything that has to do with the Church without the bishop’s approval. …Where the bishop is present, there let the congregation gather, just as where Jesus Christ is, there is the Catholic Church.

He who pays the bishop honor has been honored by God. But he who acts without the bishop’s knowledge is in the devil’s service.

In the letter to Smyrna, we have the first instance of “Catholic Church,” and it is connected with the authority of the bishop. I could have provided many more excerpts, from these letters alone, pertaining to the authority of bishops.

And it should be striking how strongly this authority is expressed. We are instructed to “regard the bishop as the Lord himself.” The respect that you owe the bishop is “fully as you respect the authority of God the Father.” “Let the bishop preside in God’s place…,” and on and on.

You can read these letters in Cyril Richardson’s Early Christian Fathers, which you can download from CCEL. Richardson’s edition was originally published in 1953 as a part of the still widely-used Library of Christian Classics series from Westminster Press, now WJK Press.

It is true that Ignatius does not articulate an explicit doctrine of apostolic succession, as Irenaeus does (not long afterwards). But it is hard to not see an implicit doctrine of apostolic succession. At the least, it is easy to see how Irenaeus (et al.) would make this explicit in his teaching on episcopal authority. For these fathers, the unity of the church and its orthodoxy were inextricably connected with the authority of bishops, especially in the apostolic sees like Antioch. Of course, this becomes a bit more complicated when you have Arian bishops in the 4th century, but nonetheless the basic principles for unity and authority were well established — and, unless you were a Cathar in Southern France, continued well into the middle ages.

It was only fundamentally disrupted, in many principalities, with the Protestant Reformation. The result is well known. Unity can only ever be a pneumatological reality in Protestantism, certainly not a visible, episcopal reality.