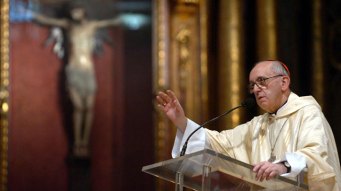 The imaging and messaging of the media portrait of Pope Francis is perhaps not unlike the 19th century quest for the historical Jesus: you see what you want to see.

Famously, that was Albert Schweitzer’s indictment of the “first quest” for the historical Jesus. The strange, supernatural, other-worldly, apocalyptic Jesus is not suitable for the progressive 19th century man. The kingdom of love, however, is perfectly suitable, so long as it does not require a whole lot of personal sacrifice — nor the most offensive of all concepts: the miraculous.

As others have observed, the current Pontiff is deeply rooted in Latin American piety, with all of its strangeness and vivid sense of the supernatural. He is also a profoundly “modern” man. This is a contradiction for our cultural elites, who energetically resolve the contradiction. The result is a highly selective portrait of Pope Francis. It is a portrait that they have painted for our consumption. We are, indeed, eager and insatiable consumers.

As I have complained before, Pope Francis is widely misunderstood and misreported. He embodies a Catholic social ethic that is incommensurate with the dominant ideologies of the West. This social ethic is, at turns, liberal and conservative. It is, at turns, comforting and discomforting to both liberals and conservatives. The recent encyclical, Laudato Si, is an excellent case in point.

The liberal adulation is predictable, as is the conservative repudiation. The latter has been duly criticized by others, so I am more interested in the former. Sandro Magister, the Italian journalist at L’Espresso, has been highlighting this problem of liberal selectivity since the beginning of Francis’ pontificate, and he steadfastly continues to do the same in regard to the recent encyclical:

If one reads “Laudato si’” with patience, in fact, one passage that coincides with the ideas of Gotti Tedeschi [on sin and the loss of God] is there, in paragraph 50:

“Instead of resolving the problems of the poor and thinking of how the world can be different, some can only propose a reduction in the birth rate. At times, developing countries face forms of international pressure which make economic assistance contingent on certain policies of ‘reproductive health’… To blame population growth instead of extreme and selective consumerism on the part of some, is one way of refusing to face the issues.”

But this passage has been ignored by almost all the world’s media.

It must be said, however, that the almost universal disregard of these passages cannot be imputed to their slight prominence in the overflowing totality of “Laudato Si’.”

[“The Other Francis: The One Who Preaches Chastity Before Marriage”]

In addition to Sandro Magister, I expected to read competent and insightful observations from Father Robert Barron. I was not disappointed. I have previously praised Fr. Barron — here and here and here.

Fr. Barron released a brief video in response to the encyclical:

Rachel Lu, writing for The Federalist, has a similar take: “Pope Francis’s New Encyclical is Not What You Think.” On the other side of the debate, The Federalist has also posted a number of critical responses. You can read Peter Johnson’s “Pope Francis’s Incoherent Economics” and Maureen Mullarkey’s “Where Did Pope Francis’s Extravagant Rant Come From?” The Acton Institute has also released some video responses to the encyclical, such as Jay Richards’ thoughts.

I am not competent enough to know the merits to these criticisms. All I know is that I like how Pope Francis upsets everyone.