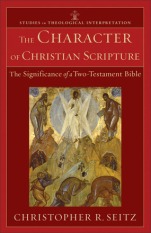 I hesitate to make any comments on the field of biblical studies. I am pretty sure that I’ve embarrassed myself in the past, but that is common enough for most who step outside of their special area of interest. Having said that, I really enjoy Brevard Childs and his chief proponent today, Christopher Seitz.

Given the luminaries on the banner of this blog, that is not surprising. And one of the most common criticisms of Childs is that his work lacks a certain scientific objectivity in favor of dogmatic commitments (James Barr) or that it lacks a certain contextual sensitivity in favor of dogmatic commitments (W. Brueggemann). According to Seitz, these and the many other criticisms are failures in grasping the category of “canonical” and what it implies, as if it flattens or runs roughshod over the historical layers which have been the focus of critics for two centuries. Rather, for Seitz, the final canonical process is itself integral to the historical process, as well as the divine appropriation of said process.

Seitz’s The Character of Christian Scripture (Baker, 2011) is a passionate response to Childs’ critics. I am far from capable of understanding the deeper intricacies in these debates or many of the qualifications that Seitz clarifies, much less could I rally a defense in my own terms. But I am learning a lot as I read Seitz’s volume, and I heartily commend it to all.

To give you one excerpt, here is Seitz (using Timothy Ward) on the “historical purveyors” on both the left and right who dismiss the canonical method:

In the context of a different discussion of this issue, Ward has also issued a challenge that might catch the allegedly “historical” purveyors of interpretation off guard. A canonical method, he suggests, does not value the later hands because of some moral superiority — or lack of it, in Collins’s view — they possess. Rather, the later hands have a greater historical perspective, due to the sheer range of their awareness of the past, which is still unfolding at the time of early tradition-levels. History lies out in front of “the original words of the prophets” because of what God is doing with them, under his providential guidance. It is a legacy of romantic theories of “inspiration” and “origins” that has set much historical-critical work off on the wrong foot, and it cannot be emphasized enough that this wrong footing has tripped up both conservative interpreters and their putative opposites. This results in maximalist or minimalist accounts of what can be secured for the “original, inspired author/prophet/source/tradition,” starting from the same quest for an authoritative base independent of the canon’s own final-form presentation.

There is an inspired and coherent Word of God to Israel and to the world, which arises from the historical speech of Amos and Hosea, in the canonical form of the Twelve, but which entails a “history” they saw only partially (and which God over time was revealing in his history). The canonical approach seeks to describe that process, and “success” is less in getting every diachronic detail right (that would be a wrong tack and would end in an “eclipse of biblical narrative”—to use Frei’s language) and more in accounting for the present structure and presentation of the Book of the Twelve, to choose but one example, as it now sits before us (or in front of us). The historical dimension of God’s real speech with real men and women is not eliminated. Amos preached a message to the northern kingdom and to Amaziah the priest at Bethel, and he likely did this before Hosea and probably certainly before Joel. A canonical approach wishes to understand this inspired speech in all its historical and human particularity. Those who shape the books associated with them and the collection of books within which they now reside did not treat them like “plucked instruments” or like the girl (was it a girl?) on the swing whose sweet (but fortuitous) singing converted Augustine. At the same time, they did seek to hear in their words the abiding and accomplishing Word of God, and so human authorship was always tied up with divine authorship and with the providentiality of the Holy Spirit’s knowledge and work.

You can read and download both the introduction and the first chapter of Seitz’s book at the Westminster Bookstore.

Later in the volume, Seitz deals with the changing norms for sexual behavior in his Anglican context. Alastair Roberts has a good review of this portion of the book. Alastair also has a helpful response, in the comments, to the ever-vexing issue of OT warfare.